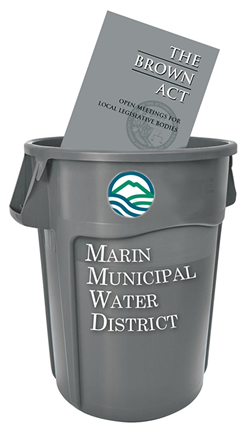 CO$T’s initial complaint was prompted by violations that occurred in the MMWD Board of Directors’ development of a rate hike and new fee proposal.CO$T alleges such violations impeded the public’s right to know about, and participate in, the board’s consideration of the rate and fee plan as it was being developed. Of particular concern were meetings, posted on the Committee calendar, in which a majority of the board participated and guided staff on the design of a rate / fee proposal and the ratepayer notice required by Proposition 218. Further, the agendas for these meetings did not clearly state that documents concerning proposed rate increases and new fees, or a Proposition 218 notice, would be discussed.

CO$T’s latest complaint alleges improper use of Special Meetings. The Brown Act requires 72 hour public notice and agenda posting prior to Board meetings. Special meetings require only 24 hour notice. What were regularly scheduled meetings posted on the Committee calendar but attended by a board majority — the subject or our initial Brown Act complaint — are now listed as Special Board meetings. This potentially subverts the 72 hour notice requirement while attempting to legitimize Board meetings at 9:30AM on weekdays when the public can’t attend.

CO$T has referred our information about alleged Brown Act violations to the Mann County District Attorney’s Office, which we believe has independently investigated related concerns.

PLEASE CONSIDER MAKING A DONATION TO CO$T to help defray our legal expenses incurred in defending Marin residents’ right to know about and participate our local government’s activities. Without your help, we cannot do what we do. Donate via PayPal at CO$TMarin.org or via check mailed to P.O. Box 253, Kentfield, CA 94914

About CO$T: The Coalition of Sensible Taxpayers advocates on behalf of the rights and interests of Marin taxpayers and ratepayers. CO$T is a nonpartisan, tax-exempt organization. CO$T’s 501(c)4 is recognized by the IRS as a social welfare organization. The CO$T Foundation, a 501(c)3, conducts educational, research, and other qualified activities funded with tax-deductible donations.