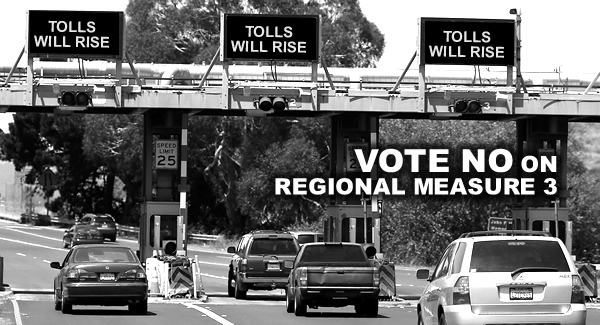 The Coalition of Sensible Taxpayers — a nonprofit non-partisan advocacy group protecting the rights and interests of Marin taxpayers – urges voting NO ON Regional Measure 3.

RM-3, a huge money grab by an out-of-control, un-elected regional planning agency, proposes to increase tolls on most Bay Area Bridges by $3…. followed by additional unspecified “inflation” increases to tolls that go on forever. Funds are supposed to go to a wide variety of road, ped/bike, and mass transit projects.

Unnecessary and Redundant – How many times will we pay for the same thing? $50 billion over 10 years will be raised from the just enacted big increases in California’s gas tax and vehicle registration fees. These too claim to pay for transportation projects. These too “inflate” forever. Plus, here in Marin we already have a Transportation Authority of Marin ½ cent sales tax and a SMART train ¼ cent sales tax. Each of these promises to reduce congestion and improve roads. Have you seen any improvement? Enough already!

Unfairly Regressive – RM-3 raises the annual cost of bridge crossing for the average worker $750, to about $2,000 per year. That’s about $2700/year in pretax income just for bridge tolls to get to work. Many workers don’t have a practical mass transit option.

Unequal Burden – Why should bridge commuters fund the entire burden of MTC’s increased local transportation funding scheme? Those who don’t cross bridges, use transit, or bicycle get a free ride.

Unaccountable – RM-3 funds will be administered by the Metropolitan Transportation Commission, which has consolidated power as a regional planning agency (controlling/mandating development as well as transportation funding). It’s an un-elected agency that uses the power of its purse to force its preferred transportation “solution” and high density development mandates.

Uncoordinated – MTC markets RM-3 as the “Bay Area Traffic Relief Plan.” There is no coordinated plan. And it won’t reduce congestion. The project is a Christmas tree with each County given a few shiny ornaments – projects that poll well with local voters.

Promises, promises – There’s no guarantee that projects will be completed, particularly if the costs come in way above initial estimates (a hallmark of the most high profile MTC projects, like the 10-years-late, structurally flawed, $6.4 billion Bay Bridge initially promised at $1 billion). Marin voters are dangled the prospect of $135 million for a direct 101/580 connector. What happens when the bids/cost come in much higher? More waiting. More tax measures promising a fix.

Uncontrolled spending – There are no binding limits on MTC’s spending, project priorities, or the time-frames for completion (if ever). MTC spends lavishly on itself, most notably a recent $258 million move of its headquarters from affordable, racially diverse, Oakland to expensive new San Francisco digs. MTC is the lead agency responsible for the Richmond San Rafael bridge fiasco: commuters demanding reopening of extra lanes were held hostage for years while MTC developed a $60 million plan to reconfigure the bridge to give half the unused capacity to cyclists.

No free lunch for Marin. Golden Gate Bridge tolls aren’t subject to RM-3. But if it passes, the financially stretched GGB Authority will almost certainly raise tolls $3 too.

VOTE NO ON REGIONAL MEASURE 3!